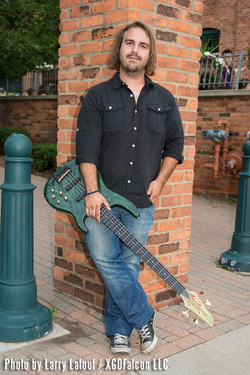 Generating a powerful presence for the musical synergy in each performance, Detroit native, Nicholas Cole-Klaes, demonstrated an innate musical talent from a young age. His command of piano, guitar, trumpet and bass progressed to stays at Columbia College, Bowling Green State University (on a full-ride scholarship) and Wayne State University, where he has studied with bassists such as Dan Anderson (principal bassist for Chicago Jazz Orchestra), Jeff Halsey (Tommy Flanagan, Arturo Sandoval) and Paul Keller (Diana Krall, Russell Malone).

His journey into the realm of bass, began out of necessity and progressed into love of the bottom end. Since then, he has been collecting basses, playing, living and breathing bass. He now realizes the importance of a funky beat, a subtle line and most important of all A TIGHT GROOVE!!!

Since age 16 Nic has toured the country, playing shows throughout the South, East Coast and Midwest. During this time he has shared the stage with acclaimed rock acts such as; Tesla, Bret Michaels, 3 Doors Down and many others. Most recently, Nic could be found holding down the low end for Remedy, playing bars, weddings and corporate functions at a pace of over 200 shows/year. Nic left remedy in Fall 2014 to focus on completing his undergraduate degree at Wayne State University.

His current musical endeavors include work with; Weekend ComeBack. In addition he can be found performing in the jazz idiom in various clubs throughout the Detroit area such as The Ghost Bar at The Whitney, Cliff Bells and many others.
In addition he is currently the music director at Unity of Farmington Hills where he organizes and leads a group of volunteers in a weekly performance as well at performing weekly at Central Church in Madison Heights. He is endorsed by Warwick Basses.
Powered by